HEARING LOSS IS COMMON IN PEOPLE WITH DIABETES

About 30 million people in the United States have diabetes, a disease characterized by high blood sugar levels. Between 90 and 95% of people with diabetes have type 2, which can develop at any age.*

Hearing loss is a common problem caused by aging, disease, heredity, and noise. 17% of American adults report some degree of hearing loss. 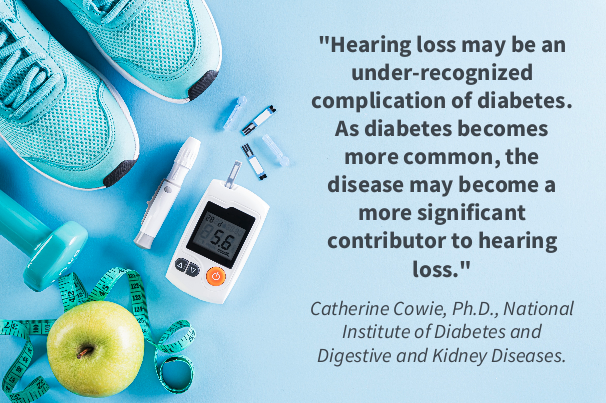 IF YOU HAVE DIABETES; HOW CAN HEARING LOSS BE PREVENTED?

You can’t reverse hearing loss, but you can treat it. If you have diabetes, you should have your hearing checked each year. Follow these tips to help protect your ears.****

Over time, blood sugar levels that are too high or too low can damage nerves that affect your hearing.*

Visit the American Diabetes Association to learn more about hearing loss and diabetes and how you can prevent hearing loss.

Hearing loss happens for many reasons. You probably know that it can happen as you age or if you spend too much time around loud noises. You may not know that having diabetes puts you at risk for hearing loss. Managing your blood sugar is a critical part of your diabetes care, it can also help protect your hearing.*

LINK: HEARING LOSS IS COMMON IN PEOPLE WITH DIABETES

ARTICLE: THREE DECADE CHANGE IN THE PREVALENCE OF HEARING IMPAIRMENT AND ITS ASSOCIATION WITH DIABETES IN THE UNITED STATES

ARTICLE: HEARING LOSS AND TYPE 2 DIABETES: IS THERE A LINK?